It’s that time of the year again where we break out our heavy-duty cleaning supplies and do some incredibly thorough cleaning and sorting to signify our fresh start in the spring. That’s why they call it spring cleaning after all. While we get rid of bigger clutter, there’s also the smaller pieces of dirt, pet hair, and dust bunnies that remain. The Hoover UH30310 T-Series WindTunnel Vacuum is a good option for you.

This review has the product’s strengths and weaknesses as well as the key features. If you’ve never heard of this particular vacuum, then you might want to read on to learn more about it. Enjoy!

Before you go for it, I highly recommend you to review UH30310 Hoover Vacuum Cleaner key features below and then decide its best for your needs or not. 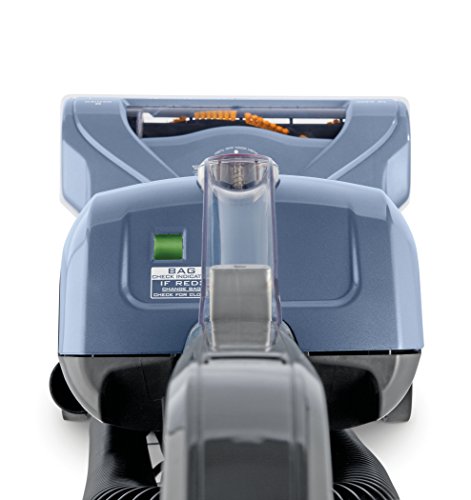 Wind Tunnel Technology
As the name probably implies, the Hoover WindTunnel T-Series Pet UH30310 is equipped with Wind Tunnel technology. This technology allows the vacuum to lift and remove surface and deep seated dirt and debris from carpets. Therefore, carpets are cleaned thoroughly and no trace of dirt is left behind.

Clean-Drop Bags
So you’ve vacuumed, and now it’s time to throw away the vacuum bag. It can be a hassle to carry the bag all the way to the trash, but the Hoover UH30310 WindTunnel makes it a little bit easier. It has a clean-drop bag feature, that, with just a push of a button, the vacuum releases the dirty bag into the trash. You won’t need to get your hands a little dirty after you’ve vacuumed, which makes it a lot easier.

As for the bags itself, they are made out of Activated Carbon HEPA that also reduces pet odors. The bag may be dirty, but it won’t smell.

Belt Change System and Brushroll Access
It can be quite a hassle to change the belts of your vacuum, but it unfortunately has to be done, unless you enjoy tinkering and using your vacuum a lot, that is. In the case of the Hoover WindTunnel T-Series Pet UH30310 Vacuum Cleaner, it has an easy belt change system. You only need to flip two levers to change the belt and you’re done. This also makes it easier for you to see the brush roll.

12-Foot Stretch Hose
So, we’ve managed to clean our floors and furniture, but the challenge doesn’t end there. There are still spaces up high that also need our attention and have to be cleaned. With the Hoover T-Series WindTunnel Pet UH30310, that has been made a lot easier.

It has a stretch hose that extends up to 12 feet, which is great for being able to clean higher spaces without having to pull the vacuum closer. And speaking of extensions, the power cord of the Hoover WindTunnel UH30310 Vacuum extends to 30 feet, which saves us some time.

Pet Upholstery Tool
Another key feature that the UH30310 Hoover WindTunnel Vacuum has is the pet upholstery tool. Pet hair isn’t the easiest to get out when it comes to cleaning the furniture, especially when our furry friends are, well, a little too furry to begin with. But, the pet upholstery tool that this vacuum has is equipped with rubber wipers that can take out even the most stubborn of pet hair from the furniture.

How Durable is the Hoover WindTunnel T-Series Pet B003EQ470G

As for durability, the T-Series WindTunnel Vacuum fares pretty well. It’s durable enough for frequent use, which is great for those who have to constantly clean their spaces, like in hotels or in airplanes.

It helps to keep an eye out for other options that are similar or maybe even better that are on the market. I’ve found a few rival models for the T-Series WindTunnel vacuum that are under the same brand and did a bit of comparing.

The Hoover U6485900 Anniversary WindTunnel vacuum has a lot of similar features as the Hoover UH30310 UHT-Series WindTunnel vacuum. They both have the Wind Tunnel technology that, as I’ve previously said, can lift deep-seated and surface dirt away for a thorough clean. The two models also have the same attachments that come in the box and the vacuum bag is also made out of Activated Carbon HEPA to reduce allergens.

Perhaps this is because the vacuum is self-propelled, and thus you can go forward or backward on surfaces with ease. Still, it means that the Hoover UH30310 WindTunnel vacuum has more adjustment options when it comes to effortless cleaning.

The Hoover U6485900 Anniversary WindTunnel vacuum also has an Embedded Dirt Finder, something that the T-Series WindTunnel doesn’t have. The sensor of the Dirt Finder turns green when the surface you’re trying to clean has no more dirt, which is actually a cool feature.

These two models are also similar when it comes to the technology they are designed with. They have the same WindTunnel technology, for thorough cleaning on carpets and other surfaces. The Hoover UH30600 WindTunnel MAX vacuum also has the clean drop bag system for easy vacuum bag disposal, as well as a 30-foot power cord for easier transport around the house.

With these comparisons, it can be determined that the Hoover WindTunnel T-Series pet UH30310 fares somewhere in between these two other competing models in terms of features and in terms of weight, as the Anniversary WindTunnel vacuum is a lot heavier by a few pounds.

I have looked through many customer reviews on the Hoover WindTunnel T-Series UH30310, and the overall rating for this product is 4.1 out of 5 stars on Amazon. Out of 910 reviews, 707 of which were positive, which is a good sign.

Many users raved about its performance as well as its durability. Some of them have been using the HooverWindTunnell T-Series UH30310 vacuum for over a year and it still works. They found that the bag does not need to be changed each time after every use and that it’s great for cleaning up pet hair on the carpets and furniture.

Why Hoover WindTunnel T-Series UH30310 Perfect for Use?

The Hoover WindTunnel T-Series pet UH30310 vacuum cleaner is perfect for everyone, especially for those who own a lot of pets. It does a fantastic job of removing pesky pet hair all over the upholstery and other surfaces. It is also a lot lighter than many vacuums in the market and the material the vacuum bag is made out of makes it easier for those who get allergic.

Based on the pros, cons, and comparisons that I’ve made in this Hoover UH30310 review, The Hoover WindTunnel UH30310 Vacuum cleaner is a really good vacuum. It’s features make cleaning a lot more easier, as well as the length of the power cord and the extension wands.

As I have previously mentioned, the Hoover UH30310 T-Series WindTunnel vacuum is just ideal for taking out stubborn pet hair and deep-seated debris in many surfaces, including those hard to reach spaces at home. This vacuum cleaner makes cleaning a lot easier and stress-free.

Image via PexelsIf you’re like us, you don’t ask a lot of your vacuum. It just needs to work. It should suck up the crumbs from all those crackers you had with your night cheese. It shouldn’t be so heavy that you can’t carry it around or store it, and it should be the right…

If you want to clean your property like a pro, then a backpack vacuum may make your life easier. Perhaps you have a bed and breakfast or offices, in which case a commercial backpack vacuum is ideal. Imagine not having to drag a bulky machine around your home or workplace and consider the benefits of…

You don’t always need a huge, expensive vacuum cleaner. For example, if you have a modest pad like many of us do nowadays, you can settle for a budget vacuum like the Hoover U5140900 Tempo WidePath Bagged Vacuum Cleaner. Widepath Cleaning If you have a lot of space to clean out, you can really use…

The field of robotic pool cleaners will not be complete without the company Hayward. After several decades of being in the business, they have become one of the top brands on the market and continue to manufacture model after model of highly efficient pool vacuum cleaners with impeccable quality. The Hayward RC9740WCCUB SharkVac XL Robotic…

If you find yourself looking for a bagless, cord-free stick vacuum cleaner, you may face the Dyson V8 vs. V10 debate. Dyson is a name long associated with high-quality, high-performance vacuum cleaners, but sometimes the different models may seem confusing. When you look at the two models, they look remarkably similar, so you find yourself…

If you’re looking for a vacuum, you probably already know that there are tons of different options on the market today. All of that choice is a good thing, but it can also be overwhelming.That’s why it’s always a good idea to first decide what kind of vacuum you want. That way, you can narrow…